What an artful Dodger!

Working in the RSPCA regional press office means that you get to deal with an array of sad, happy, shocking and bizarre stories on a daily basis.

Every animal we write about has their own very unique story, and in most cases a very sad one.

You never become immune to it, each tail (excuse the pun) generates a host of emotions and it would be wrong to deny this.


But every so often there is just one animal that sticks in your mind more than most.
﻿
And for me that is the very brave, very faithful and very cheeky Dodger.
Dodger, an 18-month-old Staffordshire Bull Terrier, came on my radar after he hit the headlines when his owner was caught on camera hitting him in a shocking attack. The footage was subsequently posted online and caused outrage among the public.


His owner was subsequently prosecuted for animal cruelty and banned from keeping dogs for 15 years.


Like people up and down the country, my stomach turned when I watched the footage, and felt so sad that a poor defenceless animal could be treated in such a way.


Dodger was subsequently brought into the care of the RSPCA; first to one of our local dedicated branches before later being transferred to the RSPCA Block Fen Animal Centre in Cambridgeshire.


While under the watchful eye of RSPCA staff it was clear that Dodger was completely deaf, and almost entirely blind.


Yet despite his adversities, and everything he had been through in his short life, his tail still wagged constantly and he had an uncontrollable urge to please people. 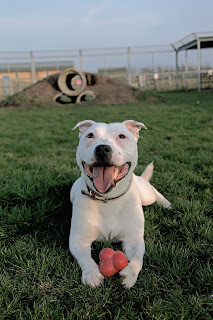 Being deaf was one thing, but added into the mix the fact that he could not even see (therefore making hand signals impossible for him to interpret) clearly meant he faced an uphill struggle.

But the RSPCA staff had fallen desperately in love with him, so they didn’t give up and sought advice from the Animal Health Trust’s Ophthalmologists (ATH).

Once again Dodger’s thirst for life won over the staff at the AHT and they agreed to remove his severe cataracts from his eyes, and give him the gift of sight back.

Both eye operations have proved successful and this cheeky chappy is well on his road to recovery.


The next step is now to find him a loving new home - which could prove difficult, as staff at Block Fen have grown so attached to him their hearts are going to snap when he goes!


I met Dodger a couple of times prior to his operations; he is just full of eager love, energy and an adorable mix of mischievousness.


I love that Dodger has been given a second chance thanks to the Animal Health Trust and the RSPCA. 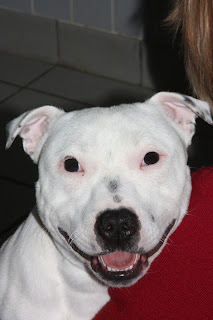 And it is just one story of many that are happening every day at RSPCA centres across the country, where staff and volunteers do all they can to help the hundreds of animals in need in their care.
It’s so nice to have a happy ending and we know once Dodger finds the right owner, he too will have his own fairy dog tail.
Of course, that’s if the staff at Block Fen will let him go...
Nicola Walker - East Regional Press Officer
Posted by RSPCA Press Team! at 06:20