Born to be wild!

I can remember the first time I met a bearded dragon. He was called Eddie and sat in a tank in the corner of a flat I was visiting. 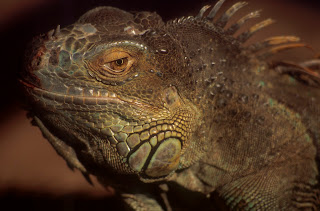 I was fascinated that such an other-wordly creature existed as I had thought dragons were a fabrication from fairy tales. Especially ones with beards.... He looked pre-historic too – staring unblinkingly at me with ancient eyes.
But I also felt sad. His owner was struggling to look after Eddie properly and wanted to rehome him. He clearly cared about him, and was doing his best. But he had bought him on a whim when a relationship ended, not realising how much work was involved with keeping the right temperature and light in the tank, buying the right food and – now that he was moving home – finding somewhere that would let him keep him.

This story is becoming rather common. In the last ten years there have been an incredible rise in the number of bearded dragon incidents the RSPCA has been called about – from 43 in 2001 to 427 in 2011.
When I popped down to the RSPCA reptile rescue centre at Patcham, near Brighton, last week there were rows upon rows of lizards, snakes and even crocodiles which had either been dumped or given up because their owners found them too difficult to look after.

As someone more used to cats and dogs, I wasn’t quite sure how I would feel about these less tactile animals which live in tanks and are unlikely to jump up for a cuddle. Yet I soon saw the appeal.

The stunning orange and white striped milk snakes which slide along the arms of centre manager Keith Wells were utterly captivating, and it was a real thrill to watch the two caiman crocodiles nose about their tank. Then there was the gecko which crawled from hand to hand in such a cheeky chirpy way that my heart just couldn’t stop itself from melting.

Such character coupled with the quirkiness of being unusual can be very alluring, and leads many to buy on impulse without properly looking into what the animal needs and how long they might need it for. From a glance around the reptile rescue rooms, it is easy to see how this can lead to problems as the initial novelty of owning such an animal wears off.

In Keith’s care was a water dragon with a huge abscess in its mouth because of the metabolic bone disease it had developed from being given the wrong food and the wrong level UV lighting in its tank. A bearded dragon had such a big belly from being overfed the wrong food that it could barely stand up. And the crocodiles, confiscated by the police because the owner did not have a proper license, were likely to grow so big in a few years that they might need to be kept in a bath.

Keith, who has a life-long passion for reptiles and their welfare, now has to try and find new homes for these ‘exotic’ animals. He needs to make sure the new owners know what they are taking on, have all the right licenses and equipment, and are likely to look after them properly for the duration of the animal’s life. This can be quite some feat – especially in the case of the highly venomous snakes which are not exactly the kind of pet you can take out and cuddle.

I can see how much work goes into running this centre, the first of its kind for the RSPCA, and the dedication shown and hours put in by Keith are very obvious. He is clearly going to do his utmost to make sure as many of these animals as possible end up with owners who love them and do their very best for them.

But I can’t help but feel a bit uncomfortable, looking at these fantastic and fascinating creatures, about them being in a tank at all. The name ‘exotic’ pet may sound appealing and exciting but the official RSPCA definition of an exotic is a wild animal kept as a pet.

It may well be that some exotic animals, such as bearded dragons, can have perfectly contented lives in captivity if looked after properly. But whether we are talking about reptiles, or other ‘quirky’ exotics such as meerkats, marmosets and racoons found increasingly easily via the internet, what we are talking about are wild animals who are thousands of miles away from home. Their natural habitats in Africa and Asia would provide the space, temperatures and light they need naturally rather than artificially provided in the corner of a room in England.

However, the reptiles in Keith’s care cannot be released to the wild over here – it is illegal and many would either be unable to survive or else cause damage to our own environment. And it is unfeasible for them to be flown home. What he can do and is doing is help them get the best life they can in captivity and educating as many people about their care as he can in the process.

As the trend for ‘exotics’ grows, and the number of dumped and unwanted exotics is growing, so is the need for more centres like Patcham and more people like Keith.
By Katya Mira, Wildlife Press Officer
Posted by RSPCA Press Team! at 07:23