"If to be alive to the suffering of my fellow creatures is to be a fanatic, I am one of the most incurable fanatics ever permitted to be at large." William Wilberforce, co-founder of the RSPCA, politician and leader of the movement to abolish the slave trade.

It's that time of year again...the shops are dripping with heart shaped balloons and cards festooned with wide-eyed kittens. Love is very much in the air...

Many people assume because we are an animal charity , we 'love' animals more than people or even stronger than that - because we show empathy to animals we are incapable of showing empathy to humans.

That is why I want to tell you about one of the brilliant schemes we run. It is a project that I am immensely proud to work on and one that helps save the lives of both animals AND humans.

But first, let's think for a moment about domestic violence.

Well, it accounts for one-quarter of all violent crime. One in four women - and one in six men- will suffer domestic abuse in their lifetime, regardless of age, ethnic origin or social status. On average, two women are killed by current or former partners every week.

It knows no boundaries and is a very serious problem.

What does the RSPCA have to do with this tackling this problem? Well, tragically, many victims find it even harder to leave when there is a pet involved - because they don't want to leave them behind but most refuges can't accept animals.

In fact, around half the households in the UK own a pet, so it's not surprising many families seeking to escape domestic abuse have animals in need of care.

That's why the RSPCA founded PetRetreat - a pet fostering service for families fleeing domestic violence. It was established in 2002 alongside Womans Aid and has already helped hundreds of pets and their families to escape abuse in the last ten years.

Through a network of amazing volunteer fosterers, we care for family pets while they are in a refuge or waiting to be re-housed; and the reunite them when they're settled in a safe new home.

Here's an example of just one animal that has been helped by PetRetreat:

Petra, the Staffordshire Bull Terrier, lived with the perpetrator of the abuse, his partner and two children. The dog (like many animals in abusive households) was also a victim of violence in the home.

On one occasion the abuser broke her hind leg in several places by kicking her. Sadly she had to live with the pain of the injury for many days as he wouldn't let her be taken to a vets for treatment.

When the woman and her children left to go to a refuge, they asked us to foster Petra.

This beautiful, friendly dog was taken for treatment by the RSPCA, and unfortunately she had to have her leg amputated. This didn't change Petra's tenacious attitude and despite everything she had been through she was still a happy and energetic dog!

Sadly many animals aren't as lucky as Petra. One woman told us that her husband threw a kettle of boiling water over her puppy and then strangled it. When she was dead she realised she had nothing to keep her there, and left.

So let's talk about love again, and the goodness of human nature. Last April we appealed for people to become fosterers, so we could continue to run this vital scheme. And you know what? More than a thousand lovely people came forward, bumping our numbers up from just 80 in 2010 to over 1,000!

If you want to know more about the appeal, why not listen to our podcast?

So right now the challenge is to meet the demand from the ever increasing number of calls we get from victims of DV needing our help.

I'm going to be blunt, because there are lives at risk (of both people and animals). We need money first and foremost to keep this scheme going. To donate, please go to: http://www.rspca.org.uk/donate/petretreat/single

But we also need people to help us publicise the scheme in any way you can - it could be a leaflet drop, a letter to your local newspaper, a status update on Facebook, a tweet on Twitter or even (and I blush saying this!) by sharing this blog. This way, more families affected by domestic abuse will know there is help out there for them and their pets.

With your help, we really hope RSPCA PetRetreat will be able to remove one of the barriers to escaping abuse, and ultimately, that it'll help families and their pets live without fear.

So, if you really want to spread a little love this Valentine's Day - why not support RSPCA PetRetreat. 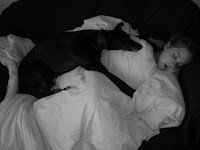