Traditionally at this time of year we buy a poppy and observe a silence to quietly contemplate those who have lost their lives in conflicts around the world.

Thanks to the amazing success of the stage adaptation of children’s novel, War Horse, more and more people are realising the sacrifice a huge number of animals have also paid in war-zones.
I recently went to see War Horse at the New London Theatre, London, and was captivated by heartrending the tale of Albert and his beloved horse Joey who is shipped to France to be in the cavalry at the outbreak of the First World War. 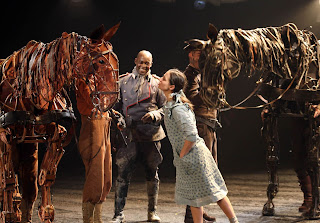 It was a tribute to the incredible skills of the puppeteers operating the life-sized ‘animals’ that much of the audience was moved to tears watching Joey’s traumatic journey from the bloody battle field, being captured by the enemy and ending up in a no-man’s-land littered with the bodies of other horses and soldiers.
My emotional night at the theatre inspired me to discover more about the involvement of animals in the First World War.

The RSPCA was 90 years old when the conflict began in 1914, and the charity was quick to realise that vets would be needed on the front line to treat animal casualties.


With motor vehicles scarce, horses were a vital way of moving troops and equipment. At one point it was estimated that both sides had a million horses on the front lines.
It wasn’t just horses that were crucial to the war effort - donkeys, mules, camels, bullocks, dogs and carrier pigeons all had vital jobs pulling ambulances, detecting mines and carrying top secret messages through the trenches or flying instructions miles behind enemy lines. 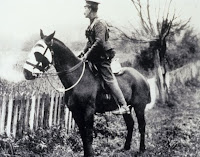 RSPCA staff enlisted in the Army Veterinary Corps and raised £250,000 – a staggering £12, 747,500 in todays money - for veterinary supplies and set up four field hospitals which saved about 80 per cent of the 2.5 million animals brought in for treatment.

Once the fighting had stopped, the work of the RSPCA continued. The charity helped soldiers who wanted to bring dogs home but could not afford the quarantine fee of £14 – equivalent to about £715 today. The RSPCA joined forces with the military to build 500 kennels to take in the dogs during their six month quarantine before they could be reunited with their grateful new owners.

And in 1932 the Prince of Wales opened an RSPCA Memorial Dispensary for Animals in Kilburn, north west London, which is still an RSPCA clinic today.

A plaque was erected outside with the poignant message: “To the countless thousands of God’s humble creatures who suffered and perished in the Great War 1914 – 18 knowing nothing of the cause, looking forward to no final victory, filled only with love, faith and loyalty they endured much and died for us.

“May we all remember them with gratitude and in the future commemorate their suffering and death by showing kindness and consideration to living animals.”

Every Remembrance Sunday the RSPCA and other animal charities pay tribute to fallen animals at the Animals in War Memorial in Hyde Park as well as at the Cenotaph.

So when you fall silent to remember those who have given their lives for the freedom we enjoy, don’t forget the millions of animals who also played their part in shaping history.