The alleys near the docks were dark, dank, and foul. Robbers lay in wait for sailors stepping ashore from their ships after months, even years, at sea.
Stray cats slithered and mangy dogs prowled. On the wet slippery roads wretched, beaten horses strained and slipped as they tried to pull their loads up the steep hills. Cattle were beaten in the street. This was London, 1824.
In St. Martin's Lane (not far from Piccadilly Circus) stood Old Slaughter's Coffee House. On the evening of June 16 1824, it was busier than usual - because a meeting had been called to discuss ways of protecting animals from cruelty.
Two years previously an Irish member of Parliament, Richard (Humanity Dick) Martin, piloted a Bill through the House of Commons called An Act to prevent the cruel and improper Treatment of Cattle, which made it an offence, punishable by fines up to five pounds or two months imprisonment, to "beat, abuse, or ill-treat any mule, ass, ox, cow, heifer, steer, sheep or other cattle."
But the Act (known as Martin's Act) needed men of vision and courage to ensure the clauses of the bill were put into effect. And one man determined to see that happen - the Reverend Arthur Broome had decided that if he could persuade a few prominent people to support him, he could found a society and employ an inspector to see that Martin's Act was properly enforced.
Humanity Dick himself was at the meeting, as well as a quiet man with a great social conscience called William Wilberforce - the politician who in the 1820’s led the movement to abolish the slave trade.
So, out of this historic assembly the SPCA was born – the world’s first animal welfare charity (The "Royal" was added later). On that night the SPCA declared they would send men to inspect Smithfield Market, where livestock had been sold since the 10th century, as well as slaughterhouses, in order to try and prevent the suffering of farm animals.

What I am trying to demonstrate is that while many people think of the RSPCA as a 'cats and dogs' charity, in fact the Society was founded in 1824 in direct response to witnessing cruelty towards livestock.
Now, nearly 190 years later – through the work of our farm animal science department and the higher welfare food and farming campaigns team - the RSPCA is very much honouring its roots; carrying out this vital work and striving for better welfare standards for all farm animals.
How do we do this? Well, by demonstrating, just as Martin and Wilberforce demonstrated, that improving farm animal welfare begins with the greatest ideas and the smallest actions.

I have worked as the RSPCA press officer for farm animals for three years and am proud of the work these guys do – largely behind the scenes. These are knowledgeable, passionate but pragmatic people, who care very deeply.


That said, it is a huge challenge to try to improve the welfare of such a large number of animals, from chickens kept as pets to pigs and cows on large-scale farms. That’s why we work in a number of different ways to encourage improvements, and always use all available science and practical evidence.
And how can you help? Well it’s easy really...buying just one item of higher welfare food a week, telling just one friend why supporting Freedom Food or Free range can help animals live better lives; or writing just one letter to a supermarket or an MP can help us improve the lives of the 900 million animals farmed in the UK each year.
To find out more about our work and what you can do help improve the lives of farm animals, go to: http://www.rspca.org.uk/allaboutanimals/farm 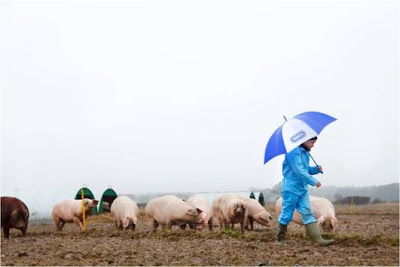