Cats and other tails from the regions

It’s all bits and pieces from me this week, starting with the change of profile pic to my dog Xabi who is sporting her new haircut for autumn!*


One of the big problems facing RSPCA branches and centres every summer is the deluge of unwanted cats and kittens which fill every space in catteries and in foster homes.


If I could ask for one thing it would be to urge people to get their cats neutered or spayed – many RSPCA branches and other organisations run discounted programmes for those who might struggle to afford it. It really is the kindest thing to do and helps prevent the heartbreaking situation of cats and kittens being dumped. 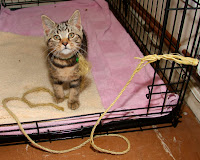 One kitten this week was found tied to a dog crate with an old piece of bailing twine in Chesterfield, Derbyshire. Just a few days later, two tiny newborn kittens were dumped in a soaking wet cardboard box in Sunderland. Luckily, all three were found before any serious harm could come to them but it could easily have been a different story.


The big story of the last week was the rescue of more than 400 Manx shearwaters which had blown off course in strong winds as they migrated to Argentina. The shearwaters were leaving the islands of Skomer and Skokholm off the coast of Pembrokeshire, which are home the largest known concentration of the birds in the world, when they ended up being stranded in the surf on the Welsh mainland.

The RSPCA rescued the birds and transferred them to its West Hatch Wildlife Centre in Taunton, Somerset to be rehydrated and fed so that they would be strong enough to survive their migration. They are now being released in groups of around 30 at twilight (as they are drawn towards daylight and may veer inland) off the south coast so they can continue their journey to South America.

In other news, we have been recognising those who have done outstanding work in the field of animal welfare in our 2nd annual RSPCA Honours ceremony, which was this year hosted by our vice president, actor and presenter, Brian Blessed.

The awards were given to some of our own inspectors for their exceptional hard work in many areas, as well as to individuals like Jill Robinson from Animals Asia for her incredibly effective efforts to end the cruel practice of farming bears for their bile, and to Danny Penman, a journalist who has covered countless exposes of animal cruelty, such as Canadian seal hunts and the shipment of monkeys in Asia to European laboratories, to the public’s attention through his tireless undercover work.


And, finally we’d like to say a big thanks to Simon Pegg. The Shaun of the Dead and Run Fatboy Run star popped into an RSPCA charity shop in Crouch End, London, to donate a bundle of clothes. The clothes included a Versace suit and the money raised will go towards helping the thousands of animals cared for, treated and neutered by the Central and North London branch of the RSPCA.


*Xabi was rehomed from RSPCA Block Fen in Cambridgeshire six years ago. She doesn’t shed hair so needs regular grooming as she gets very furry, hot and uncomfortable, especially now she’s getting older!