As night-time falls the creeping, slithering, stalking world arises, lit only by a pale-faced moon.

From ghoulies and ghosties, long-leggedy beasties and things that go bump in the night, Halloween can be a lot of fun.

And, certain animals, including black cats and blood-sucking vampire bats, are perfect for evoking a sense of fear around this time of year.

Black cats have been the subject of much debate, fear and superstition for centuries. Depending on the part of the world you live in, or the time in history in which you lived, they could be associated with witches, anarchy, evil, demons, illness, prosperity, luck or even a storm at sea.

Today, superstitions about these cats still remain. This may be the reason why many animal charities – including the RSPCA and Cats Protection – report difficulties in rehoming black cats. In fact an RSPCA centre in Shropshire has designated October 'Black Cat Awareness Month' in a bid to rehome unwanted felines.

One such example of a beautiful black cat that keeps being overlooked is Trixie. This gorgeous two year-old girl has been through a lot in her short life.

Trixie was left totally bald on her back legs, and had to have her tail amputated after she was injured by a small child who had got hold of a pair of hair-straighteners. Sadly it is not unusual for RSPCA staff to see animals come into our care with horrific injuries caused either by accident, neglect or mistreatment. 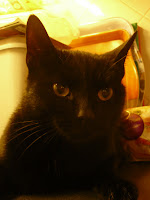 Trixie is currently being looked after by a foster carer (another group of unsung heroes without whom the RSPCA couldn't continue to care for the thousands of animals it does), and they tell me that she is a lovely, affectionate and very placid cat - despite what she has been through.

Apparently she is fine with other cats, and even though her fur may never grow back, with lots of TLC she will grow in confidence and become a loyal companion for someone.

Not just that, but in the spirit of Halloween, Trixie has white marks on her sides - which means she is also rocking a rather fabulous Mortica Addams look!

If you are interested in giving Trixie a new home, please contact Lisa at RSPCA Northamptonshire on 07840 926122. To see other cats looking for good new owners, why not visit our rehoming pages on the website and brighten up a black cat's day?

Cat facts:
• In Florida, USA, some shelters halt black cat adoptions at this year. They say many people will adopt black cats simply for Halloween decorations, not because they want to provide a home to a new pet. Palm Beach also bans adoptions on Friday the 13th.

Few things are more chilling that the thought of a night creature that subsists on the living blood of another organism. Perhaps that’s why bats have lived in our haunted imaginations for thousands of years.

Even before Bram Stoker's book, Dracula, fear of blood-sucking animals was common, and many cultures from different periods have their own version of the story. However, a real bat is much more innocuous. Most subsist on insects. Of the hundreds of species of bats, only three actually drink blood - and only one drinks blood from mammals.

In fact, the RSPCA does a lot of rescue and rehabilitation work with bats – at all times of the year, not just Halloween!

A bat expert at our Stapeley Grange Wildlife centre has discovered a new way rehabilitating injured bats, and back in June we cared for 47 baby bats which were illegally removed from their roost, leaving them without a mother.

The pipistrelle babies were discovered in the box in Wiltshire by a member of the public along with two adult females, one with a fractured wing.

The baby bats, some "no bigger than a thumbnail", were all infested with mites and suffering from dehydration. The orphan pipistrelles are currently being hand-reared, round the clock, by a team of six "bat workers".

So that’s it for today’s blog. Just remember - most of the time we make up scary stories about certain animals just to entertain ourselves...but of course, that doesn't mean they're not lurking, just outside your window...

• Vampire bats adopt orphans, and are one of the few mammals known to risk their own lives to share food with less fortunate roost-mates.

• An anticoagulant from vampire bat saliva may soon be used to treat human heart patients and stroke victims.